First, I have to give credit where credit is due. I was bored one evening and strolling through Youtube when I stumbled upon a video by one of my favorite Youtube channels Web DM:

If you have never heard of Spelljammer and you love D&D, you owe it to yourself to at least watch this video.

Spelljammer was a setting published by TSR for AD&D back in 1989. It was originally conceived of as a way to intertwine their already published settings (Dragonlance, Faerun, and Greyhawk) into one cohesive multiverse.

Spelljammer borrowed ideas from the cosmology of ancient and medieval scholars and presented a world where every planetary system is surrounded by Crystal Spheres. These spheres are impenetrable (except by certain magicks) and float within a rainbow ocean called The Phlogiston (I’ve heard it pronounced Flog-is-tahn as well as Flo-gest-on).

The area within a Crystal Sphere (inside a planetary system) is called Wildspace, and outside the Sphere is the seemingly endless Phlogiston (also called The Flow). The Crystal Sphere’s primary purpose appears to be to keep the Plogiston out and Wildspace in, and within Wildspace gods and divine powers can function as normal. In The Flow though, dimensional magics as well as divine magic fail. The gods are seemingly prohibited from entering The Phlogiston.

Now these cosmological and metaphysical flavorings caught my attention, but what interested me more was how this simple framework blew my mind in terms of what it implied I could do with world-building as a DM.

I could do ANYTHING.

Fit it all in the same physical reality, and make it possible to jump from one strange world to another.

I searched the internet and could not find a satisfactory Spelljammer for 5th Edition. The only file I found was poorly written and the file was corrupted so you couldn’t even read the whole thing and it appeared as if the writer had given up halfway through.

Then one day, on a whim, I went to a Half Priced Books to see if maybe they happened to have some Spelljammer books.

Rolled a Nat 20 on my Investigation Check. 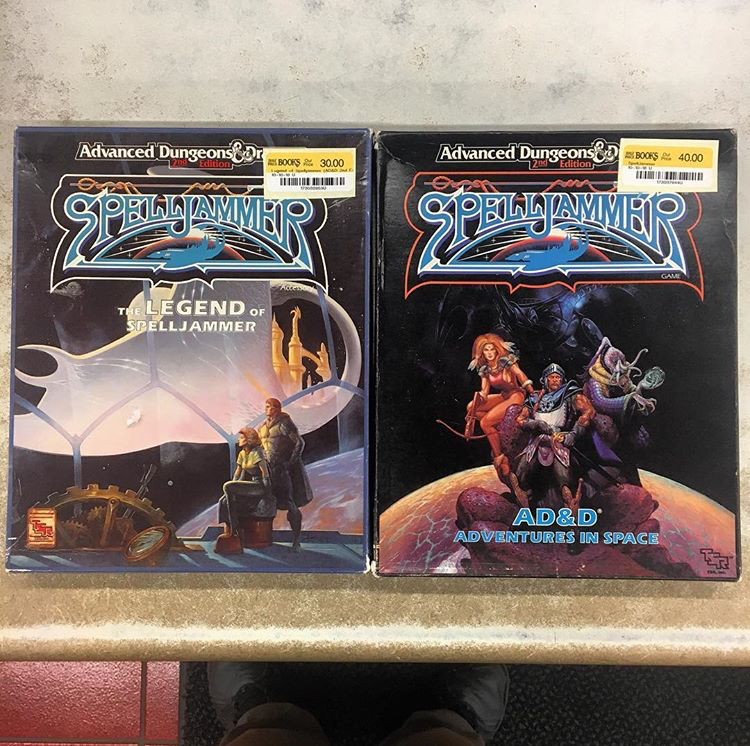 I found the two main Boxsets for Spelljammer in near mint condition.

And I commenced to devouring their contents like a starved Mindflayer discovering a vintage wizard’s brain.

I was immediately disappointed. In their video, Johnathan Pruitt made it sound like you could pick up these old rulebooks and run Spelljammer for 5e with little to no conversion. I vehemently disagree. So many aspects of the original Spelljammer are simply not suited for the 5th Edition design philosophy and style. Who the fuck wants saving throw matrices anymore?

Well, I don’t do anything half-assed, so I set off working on a careful and considerate conversion of these old rules and bringing them into the new and glorious age of 5th edition.

I have done the hard work for all you lovely internet people. I condensed down 49 pages of The Lorebook of The Void and 71 pages of The Concordance of Arcane Space and I give you two simple and easy to use PDFs for free. (because I found out after doing all this work that I cannot post either of these PDFs on DMsGuild or DriveThruRPG due to copyright issues.)