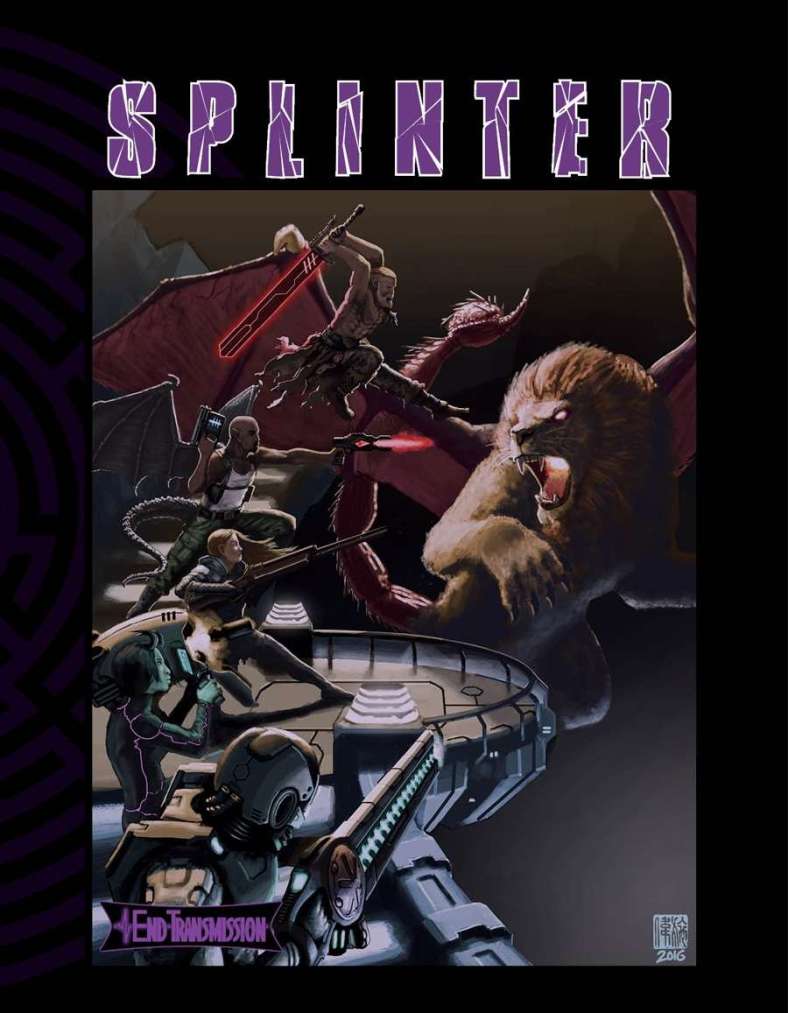 Splinter is an RPG by End Transmission Games that I picked up a year ago at Gen Con 50 in 2017. I was drawn to it like a moth to a flame because of the conceit of the game. You play a “Player” in a dystopian future Earth where all of human society revolves around watching “The Game.” Equal parts Pro-Sports/Game-Show/Reality T.V. The Game is live (and recorded) broadcasts of Players porting into an infinite virtual reality world called The Splinter, controlling native inhabitants as their Avatars, and engaging in exploring this massive fantasy world.

Splinter (the RPG) has a lot of really unique and interesting hooks for players and game masters to sink their teeth into. Unfortunately, sometimes in the core book there’s shards of poorly written and disorganized spastic thoughts that catch in your throat like broken glass. So here I am, compelled to share with you my thoughts about this great (and also terrible) rpg hidden gem.

It starts out great on the back cover: “YOU ARE THE PLAYER. Earth, 2471 AS. The only thing that matters is The Game. As a Player- a trained Professional or a conscripted Amateur- you Port into The Splinter with an audience of millions watching your every move. In a VR mega-dungeon of infinite size, you will struggle in conflicts dire, for your very life, and for the entertainment of the masses.”

And then: “YOU ARE THE AVATAR. The natives of The Splinter – taken by Players as their Avatars – don’t know it’s an ultra-violent spectator sport for Earth. To them, The Splinter is the True Realm: an ever-expanding, ever-changing, mega-dungeon labyrinth. The inhabitants of the Splinter are as strange as their environment: powerful shapeshifters gifted with the power to alter reality through will alone.”

And finally: “ON DYSTOPIAN EARTH, only the rich and famous can afford personal freedoms. And the only way to get famous is to put on the best show you can…or die trying. IN THE SPLINTER, everything’s out to kill you. Even your fellow Avatars. And when you die in the Splinter, you die on Earth. WILL YOU KILL YOUR WAY TO SUPERSTARDOM, OR WIND UP A SMEAR ON SOMEONE ELSE’S HIGHLIGHT REEL?”

fuck-ing-COOL. You got me. Shut up and take my money. This game is set in a weird world that feels like an insane mashup between Running Man, Death Race, The Matrix, Ready Player-One, Dark City, 1984, and Metalocalypse all rolled into one huge package. You have two characters, a Player and their Avatar. You get to roleplay in both sci-fi dystopia, and high magic fantasy. The two lives change and grow organically from one another. So for example a Player that develops their Earthside Strength will end up causing their Avatar to hit harder, and a popular Avatar that gets kills garnishes more Subscriber points for their Player which they can then spend on loot Earthside. And the two characters information can fit on a single 2 page character sheet (left side Player, right side Avatar). Like wtf!? This game is awesome!

Until you start to parse through the rules.

Page 1 rubbed me the wrong way:

“CAVEAT If this is your very first RPG…put this book down, play another one first, and then come back. The weirdness will be waiting.”

Fuck you. Don’t tell me what to do rule-book. Tell me how to play your fucking awesome game and why I shouldn’t bother with other books. Don’t tell me I’m not smart enough for your game. Fuck you sir. BAD WRITING. TERRIBLE MARKETING. But it pissed me off enough to be determined to understand and master the “we’re too edgy for you” rules.

Then the first 18 pages are a short story. A vignette of what play could “look” like. Why? To show you how cool this game is but not tell you how to actually start playing.  Page 20 finally gives a solid setting to grasp. The Game is everything. If you don’t watch The Game you’re rebel scum. Cool. Great. HOW DO I FUCKING PLAY THIS FUCKING GAME?!

DON’T YOU MEAN CHARACTER CREATION? In most games you, the player, create a character. In this game, you, the person create a Player AND you create their Avatar, the “character” that they “play” inside the Splinter itself. Complicated? Yes. A bit of a mind screw? Definitely. But that’s the way we like it. Later on in this book, the word Player, when capitalized, in these rules refers to the character you play, who is, within the game, a Player. When we refer instead to you, we will do everything possible t make it clear; usually, we will just say “you”, not “the player”.

I will momentarily stop ranting about the poorly written arrogance of the author of this rule book and tell you now why I’m excited to run the game despite all the roadblocks of syntax and posturing.

Creating a Player you have 4 Attributes that factor into everything you could possibly do. You pick Skills based on a point buy system (deliberately open-ended so you can have a Bootlicking Skill if you really wanted it). As an Amateur you probably had illegal bacon that wasn’t approved by your corporate overlords. You get conscripted into The Game as punishment. You have no money. No possessions. You only matter if you can score some Subscribers (Twitch anyone?). If you live long enough and get enough Subscribers you can port back out of The Game in one piece. Maybe eventually make enough to even get a Mansion for 7 million Credits, a sweet ride for 60,000 Credits, and complete it  all with some Barbiturates and a High Class Escort for 5,000 credits a day. Live the rich life above the scum.

But then you have to eventually port back into the Splinter. Don’t wanna lose Subscribers because you got fat, sassy, and irrelevant. Playing an Avatar you have access to incredible Tuning powers that allow you to bend and warp reality. You can shapeshift between a Man form, a Hybrid form, and a Beast form. You play in Deathmatches against other Player’s Avatars, you try your luck in Escape matches where failing to find a working Exit Port by the time limit means instant death by poison. You rise up in Subscriber Points and can improve your Avatars stats by the experiences you gained staying alive.

But the Splinter is still a massive mystery to you and your corporate sponsors. And your corporate overlords keep pushing you into even more death defying shows. Maybe Guerilla Radio is right? Maybe it’s time to use your wealth and fame to overthrow Gamescorp. Self-destruct it from the inside. But how? The Wardens, their painless masked militia, will riot shock baton you to the ground in a puddle of piss before you even get to an Executives office. You’ll have to work hard to climb the ladder before you can set the whole thing ablaze. But when you finally have all that money and all that power will you really buck the system that made you?

This is why I’m prepping a fresh new Splinter campaign for next Thursday. This is why I trudged through the sometimes tedious and opaque rules of the core book. Because it is FUCKING KICKASS. If you can exercise patience and can forgive poorly formatted writing and layouts, Splinter is well worth the price of admission. I’ll make another post after our first session.